We're Getting a WHAT? 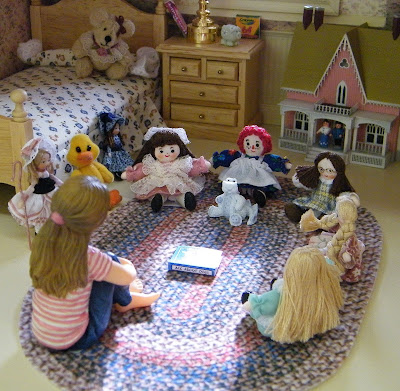 The dolls called a meeting to ask their Girl what exactly a "puppy" was. They'd heard one was coming to the house, and while they didn't know what it was, it didn't sound like a good thing.
*******
This was a weird throwback for me. A million years ago we made Norm's Dollhouse postcards, from pictures I took around the store, We put them with people's receipts when they bought stuff. We did them through Zazzle, and I'd totally forgotten about it, but it turns out the Zazzle shop is still up and someone just bought one!

Also, I don't blame any doll for thinking a puppy sounds like a bad idea. Puppies are great - for those of us who aren't made of cloth and stuffing. :) But Ginny is the only puppy dog allowed in the Wylde Kingdom.